Back to Blog Frogwares Studio, Sergey Oganesyan published on August 25, 2020

As some of you have noticed, The Sinking City has been taken down from Steam and many other notable stores. We have received multiple emails and messages on this issue. The reason is a bit complicated, yet at the same time, quite simple. Short version: We were forced to terminate the contract with our licensee for several breaches of our agreement. We urge you to read this open letter to our fans, journalists and people of the industry, to understand why this is happening and how you can still get The Sinking City.

The following information contained in this letter is part of court proceedings, meaning that the information is now public and confidentiality rules do not apply anymore.

Since the release of The Sinking City on June 27, 2019 we’ve been involved in legal battles with BigBen Interactive/Nacon over the title. In 2017 we signed The Sinking City contract as a licensing agreement with BigBen/Nacon, 2 years after the start of production. In exchange for a financial contribution to the development, we gave them the right to sell and commercialize the game on 4 platforms – Xbox One, PS4, Steam and later, Epic Games Store. The intellectual property would still belong to Frogwares, which has always been the only producer and owner of its games, including The Sinking City.

We signed the deal on those terms and we would receive part payments for each production milestone completed. Then a share of revenue starting at the first euro or dollar. So all was well – until the collaboration started.

During production, BBI/Nacon was hundreds and hundreds of days behind in payments in total. Each sum due on average being 40 days late, while our milestones were always on time and approved by the licensee. We had to issue formal notices multiple times so that we were able to receive the money that was owed to us.

The lack of commitment to honor the financial obligations soon turned into ongoing pressure. Once BBI/Nacon bought out a competing studio working on another Lovecraftian game, they dictated that we give them our source code for The Sinking City. Once again, BBI/Nacon does not own the IP – they are a licensee. They sell the game – not develop and co-create it. After we refused to comply, we stopped receiving financial contributions for over 4 months.

This kind of unacceptable behavior took on other forms as well.

With regard to the business plan, we were kept in the dark. We asked on multiple occasions to see sales forecasts, but the figures sent to us were not consistent. We weren’t sure of how potential sales could turn out, meaning that we were not able to properly plan our future. Were there any sales deals arranged? We were not sure. Only the exclusivity agreement with Epic Games Store gave us some respite, as we knew what we would receive due to the minimum guarantees in Epic’s contract.

On June 27, 2019, The Sinking City was released on Xbox One, PS4, and Epic Games Store. That was a great day for us. And once the game was released, we received a letter from Bigben/Nacon that the milestones that were previously approved are being canceled, meaning that we would not receive any profit from the sales of the game. A retroactive cancellation on not delivering a product on time that is already out in the market is not acceptable. That was when our legal battle began.

We filed a lawsuit against Bigben/Nacon on August 2019 and, incidentally, only then we started to receive income reports, though incomplete and undocumented. So it was not possible for us to see if the revenue was correctly calculated or even how many units we sold. At some point we received a statement claiming that one of the console manufacturers hasn’t paid royalties for more than 5 months, while actually the same console manufacturer paid our royalties from other games without any delay in the same period of time.

Furthermore, we were surprised to find that copyright notices on box covers and storefront pages were legally incorrect, creating a perception that it was not Frogwares which was the owner of the IP.

Our Frogwares logo was removed from some of the PS4 and Xbox One game’s cover and other marketing materials and we only were mentioned on the reverse side with the technical partners, again, creating a perception that we were neither the authors, nor the owners of the game.

Dozens of domain names for our Sherlock Holmes and The Sinking City brands were bought (page 109-112) by Bigben/Nacon without notifying us.

A tabletop The Sinking City RPG was created without even informing us, and distributed freely, featuring the wrong copyright notice.

Finally, when launching Nacon on the public market, the official stock market prospectus suggested that the intellectual property of The Sinking City was owned by BBI/Nacon, while, again, The Sinking City is owned by Frogwares. (page 59) 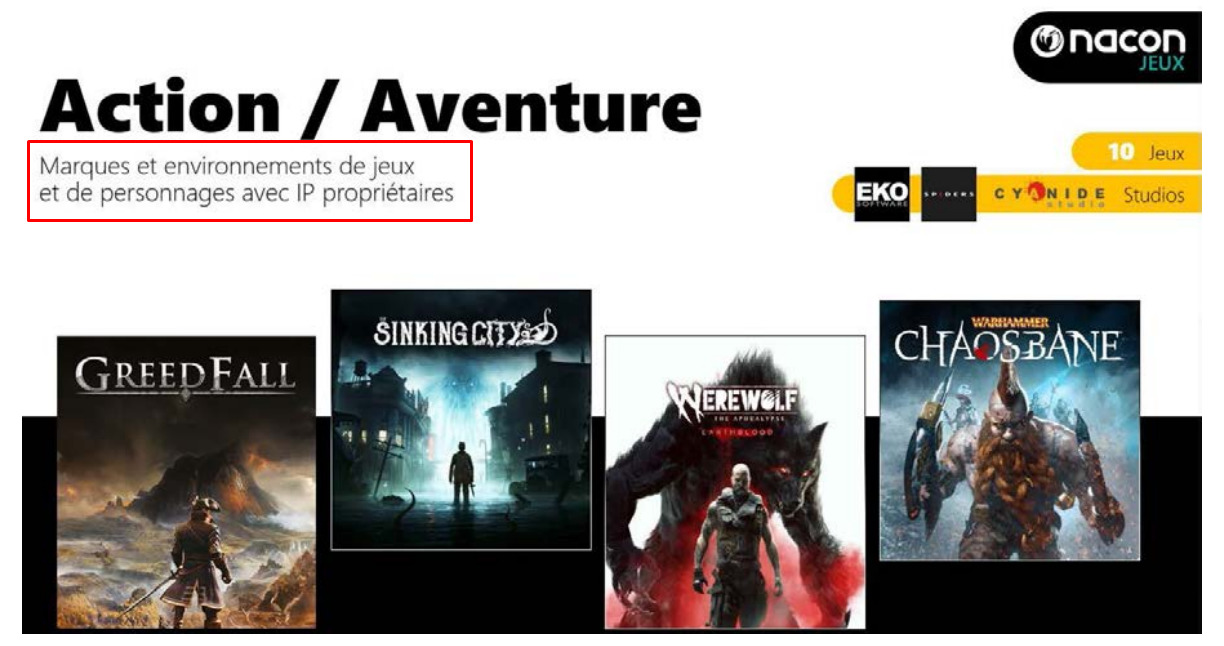 And only by pure coincidence we learned in February 2020 that the exclusivity contract with one of the storefronts was on the verge of being breached, when there was an attempt to release a pirate version of The Sinking City on a third-party pc-game subscription service. We were forced to step in and prevent this from happening.

We tried to contact BigBen/Nacon for 11 months and resolve these issues, but we have not received any satisfactory response from their representatives. So during a lengthy and exhausting legal battle, we finally decided to terminate the contract on April 20th, 2020, because of the numerous above-mentioned issues.

However, presented with all the evidence, there still came the coup de grâce.

In our email exchange, BBI/Nacon essentially wrote that the contract cannot be terminated because of the emergency laws in France, aimed to protect businesses during the COVID-19 pandemic, and at the same time BBI/Nacon refused to fulfill their obligations toward us (payment, documented reports, etc…).

The video game industry is one of the few spheres that flourished during the COVID-19 crisis, and BBI/Nacon stock market communication largely supported this state of affairs: ”Turnover was up sharply at €15.7 million (compared with €10.4 million for the 4th quarter 2018/19) thanks to the boom in digital sales, benefiting in particular from the “lockdown” effect, which “boosted” games sales. The latter were multiplied 2.7 fold over the period.”

As a result, two more reasons for the contract termination emerged:

– We have completely stopped receiving the royalties that are still being collected on our behalf and owed to us, now amounting to roughly 1 million euros.

– The “Emergency Laws explanation” actually triggers the Force Majeure article of our own contract, entitling us to terminate the agreement in case the parties could not minimize the effects of an Event of Force Majeure on this agreement for a period of 60 days.

The agreement is, therefore, terminated without further formality. Moreover, on July 17, 2020, Nacon attempted to oppose the termination in court, but the judge rejected the demand, and the contract is now terminated in the eyes of the law.

However, while there’s no need for BBI/Nacon to formally acknowledge the termination, the former licensee has created a perception that it is they who still own The Sinking City, and so various partners and platforms are sometimes confused, overly cautious or preemptively delist the game themselves while dealing with our requests to return full control of the game to Frogwares.

Given these breaches, ongoing hurdles and an unwillingness to cooperate, Frogwares last resort was to request the removal of The Sinking City from any remaining stores to at least halt any further sales going to BBI/Nacon.

Faced with this situation, we have decided to explain to you why you cannot find The Sinking City on certain platforms today.

To all the players that wish to buy The Sinking City – we are more than willing to have the game be present everywhere and we will inform you as we reappear on more platforms on our social channels. For now, you can now buy a PC version of the game through the partners that we ourselves dealt with such as Origin here or Gamesplanet here, or on Nintendo Switch here.

To developers and people of the industry – if you want to talk about this, reach out. We will try to answer you as much as we can so that you won’t end up in similar situations. It is a shame that in such a creative industry there is so much energy wasted because of such practices. That’s why we decided to write this open letter. We hope that this transparency will help everyone to be aware of what is really going on behind the scenes. We only have one goal: helping to banish bad practices by speaking freely about them, instead of remaining subject to the code of silence. We know that we are not the only ones in this situation. This is our way to help the video game industry become more ethical.